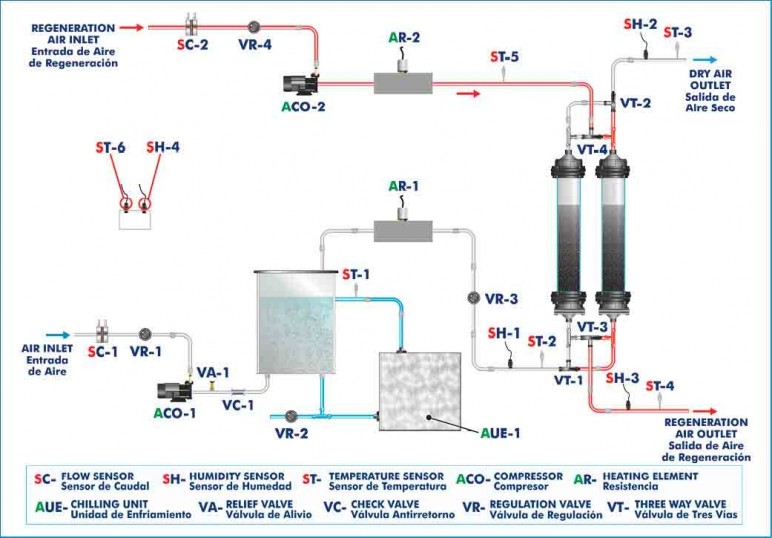 It is formed by two different circuits, each powered by its own compressor and heated by its own heat exchanger, and each one has a column that can be used for both adsorption and desorption.

For the adsorption process, a compressor, controlled by the computer, is used to transport ambient air from the environment to the process inlet. This flow can also be controlled by means of a valve. The air is directed towards a humidifier to reach its maximum relative humidity. The humidifier consists of a water bath, which is cooled by a refrigerating unit and a pump, to drive the cooled fluid to the water bath to maintain the temperature stable. This temperature is controlled by means of a PID control.

At the outlet of the humidifier, the air reaches a heat exchanger where it is heated to regulate the temperature and the relative humidity of the air, which is controlled by means of a PID control.

The wet air enters the adsorption column through the bottom and passes through the adsorbent (silica gel), which is arranged in a transparent column as a fixed bed. The adsorbent adsorbs all moisture from the air and has a colorimetric indicator to facilitate identification of the mass transfer zone (MTZ).

The dry air leaves the column through the top and goes outside.

The hot regeneration air enters the second adsorption column through the top and desorption takes place. The loss of color of the mass transfer zone through the transparent column can be observed.

As it is formed by two columns, the unit allows for loading and regenerating the adsorbent alternately and studying the processes of adsorption and desorption simultaneously. If the adsorbent capacity of one of the columns is exhausted, the wet air will pass through the column with regenerated adsorbent.

Due to the continuous measurement at different relevant points of the relative humidity of the air and of the temperature, a balance can be established between both processes. These values are recorded by the software, which allows the representation of these processes in the enthalpy-specific moisture diagram (h-w) and the log of rupture curves (C-t). 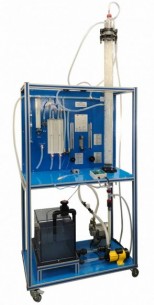 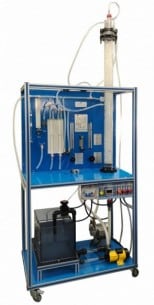 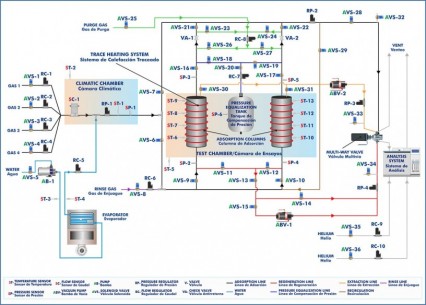 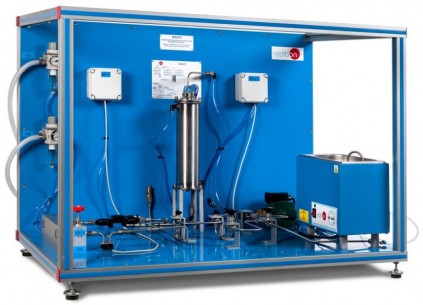 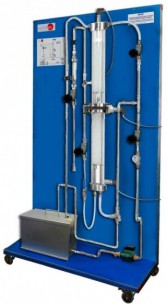 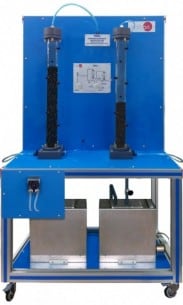