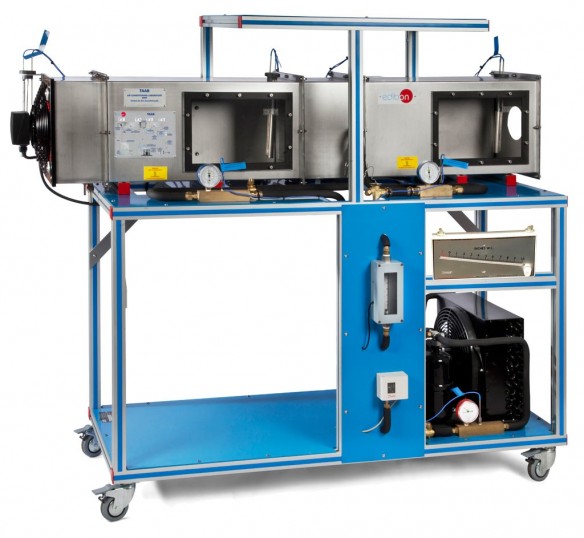 The Air Conditioning Laboratory Unit, "TAAB", main objective is to introduce the student in the complex world of the air conditioning installations, as well as to study and determine the optimal parameters for the unit operation in function of the environmental requirements (humidity, heat, temperature and refrigeration, etc.).

The Air Conditioning Laboratory Unit, "TAAB", has been designed to study the change of the air conditions and the refrigeration circuit. The unit consists of a testing tunnel made in stainless steel, in which there have installed two windows. Inside of the tunnel there is an axial fan and two heating elements, one situated at the evaporator inlet and other situated at the evaporator outlet.

The unit has an inclined manometer to measure the air flow and four hygrometers situated along the tunnel. These hygrometers are formed by two temperature sensors (wet and dry bulb).

Two steam lines inject steam from a steam generator (not included) to the tunnel to modify the air characteristics.

The tunnel includes an evaporator in the middle. It consists of a finned radiator through which a coolant flow circulates. This radiator is placed perpendicular to the air flow generated by the fan.

Coolant flows through a closed circuit. It enters to the compressor and circulates through a filter (to retain particles of condensate), a flow meter, an expansion valve, the tunnel evaporator (the coolant absorbs the air heat flowing through the evaporator) and a condenser.

Several temperature sensors, manometers and a flow meter have been strategically located, allowing to study the refrigeration cycle and quantify the evaporation and condensation capacity. In addition, the unit includes a high pressure control to avoid an excess of pressure in the unit. 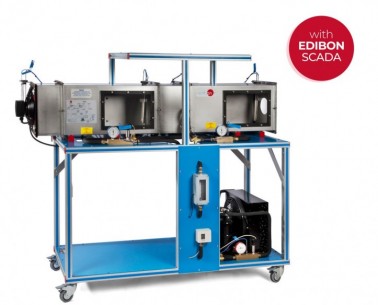 The Computer Controlled Air Conditioning Laboratory Unit, "TAAC", has been designed to study the change of the air conditions and the refrigeration circuit.The unit consists of a testing tunnel made of stainless steel, in which there have... The Computer Controlled Air Conditioning Unit with Climatic Chamber and Water Chiller, "TACC", is an actual air conditioning system with climatic chamber suitable for people and allows the study of the influence of different operation modes of the... The main element of the Computer Controlled Hot Water Production and Heating Teaching Unit, "EACC", is the boiler. Its function is the heating of the water that will flow through the other elements transferring its heat. It is a low temperature... The main element of the unit is the biomass boiler, which will heat the water that will flow through the other components transferring its heat.The boiler is a biomass boiler of 16 kW that works with pellet and other granulated fuels. The body of... The Computer Controlled Unit to Study the Efficiency of a Heating System, "TEHSC",designed by EDIBON allows for studying and analyzing a closed heating system made upof pipes with different diameter and fittings normally used in real heating... 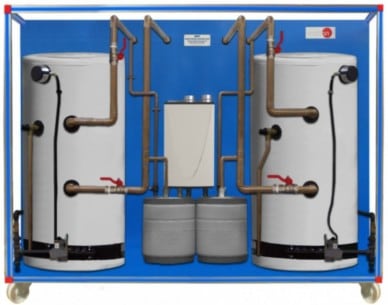 The Water Heater Training Unit, "WHT", allows demonstrating the operation of three types of water heaters. The unit has three heaters, two of them commercial one with electronic ignition and one in millivolt, and a residential gas heater without... The Heat Pump for different Heat Sources and Heat Exchangers, "HPSE", represents the typical compressor compression refrigeration plant. The compressor is of the scroll type, which is a positive displacement compressor.The evaporator and condenser... The unit Fan Heater and/or Air Heat Exchanger, "FHAH", designed by EDIBON, allows the visualization of a fan heater and its functions as a heat sink. It can also be used as a heat source working in conjunction with a heat pump.The main component...

The Computer Controlled Air Conditioning Laboratory Unit, "TAAC", has been designed to study the change of the air conditions and the refrigeration circuit.The unit consists of a testing tunnel made of stainless steel, in which there have... 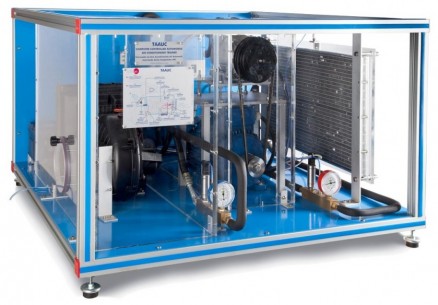 The Computer Controlled Automobile Air Conditioning Trainer, "TAAUC", consists, basically, of a compressor driven through a belt by a motor that simulates the engine of a car.The number of revolutions of the engine and, therefore, the compressor,...