The gear assembly of the "MBW" unit consists of:

It is a gearing system in which power is transmitted to the assembly through the central sun gears. For forward gear ratios power will beintroduced through the forward sun gear and for the reverse gear through the reverse sun gear. In both cases, the final motion is transferredto the output shaft through the ring gear.

The Borg-Warner Automatic Transmission, "MBW", has a torque converter and a three-speed automatic system. The transmission consists of three forward gear ratios and one reverse gear. They can be selected and their gear ratio studied through the coupling of the appropriatemechanical actuator in the different discs available to brake the elements of the planetary gearing, simulating brake bands and clutches.

Two graduated discs are included, one at the inlet and the other at the outlet, to measure angular displacement, allowing to observe thegear ratios of the assembly and to compare them with the values calculated theoretically.

Other special feature of the unit is that it has a freewheel mechanism that blocks the rotation of a shaft in one direction, allowing rotationin the opposite direction, and it allows to visualize the braking effect. 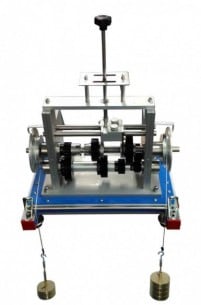 The Gearbox unit "MCC" has been designed to represent the typical position of a simple gearbox with three gears ratio and reverse.Basically, the gearbox consists of several gears of different size that can be meshed as required. Those gears are... 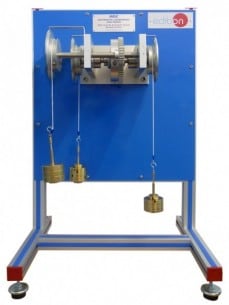 The Overdrive Unit, "MEC", includes a set of epicyclical gears that represent an application of a simple epicyclic arrangement of the type used in a motor vehicle overdrive. A simple epicyclic set consists of: Sun gear that rotates together with...

The Static and Dynamic Balancing Unit, "MED", developed by EDIBON is a unit to study and analyze the oscillations and vibrations and how to eliminate or diminish them.Basically, the unit is formed by a shaft mounted on bearings. This shaft is...