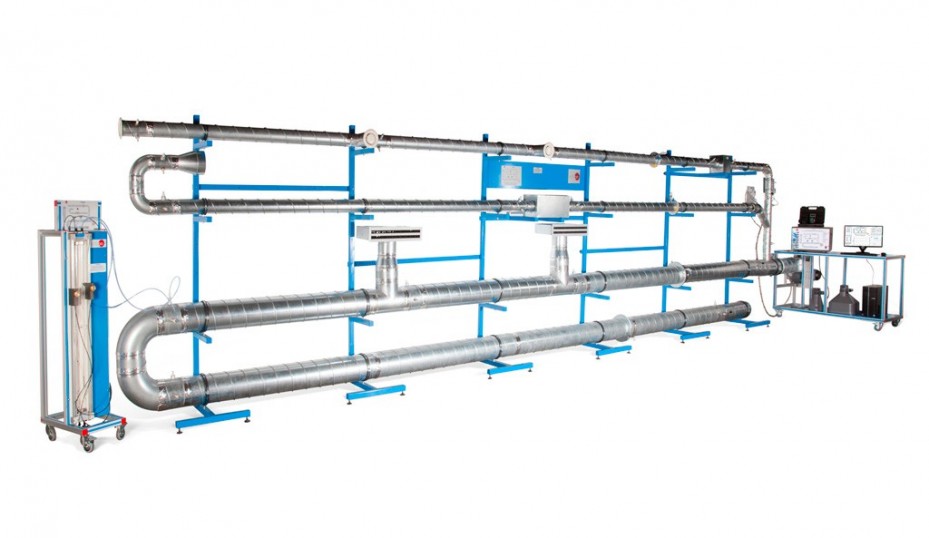 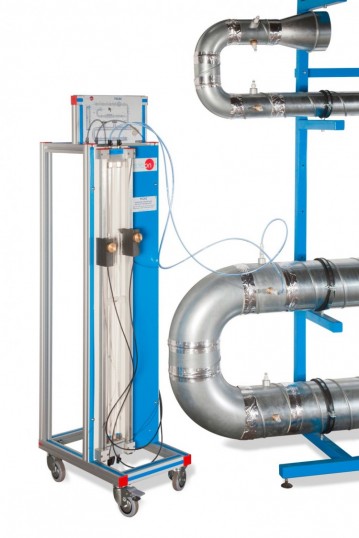 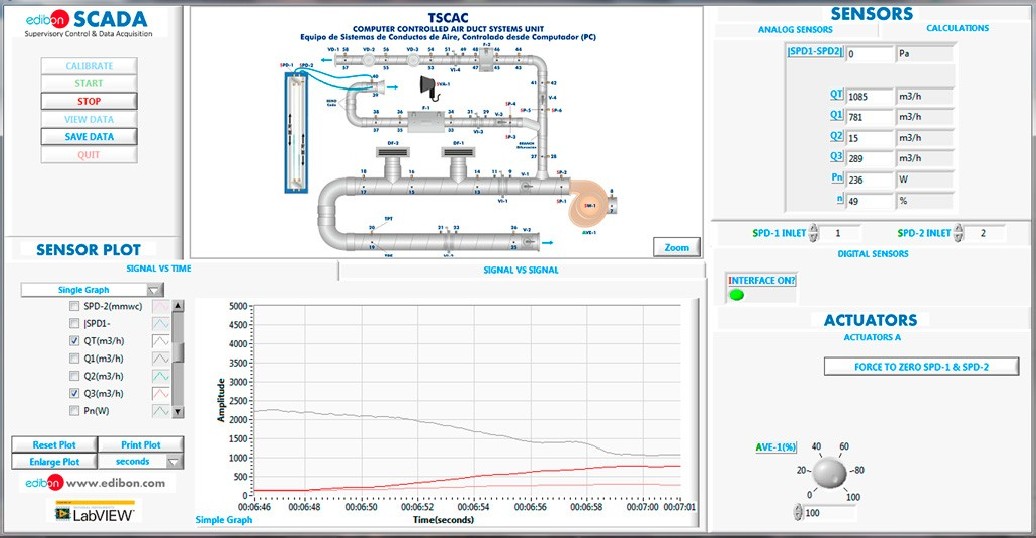 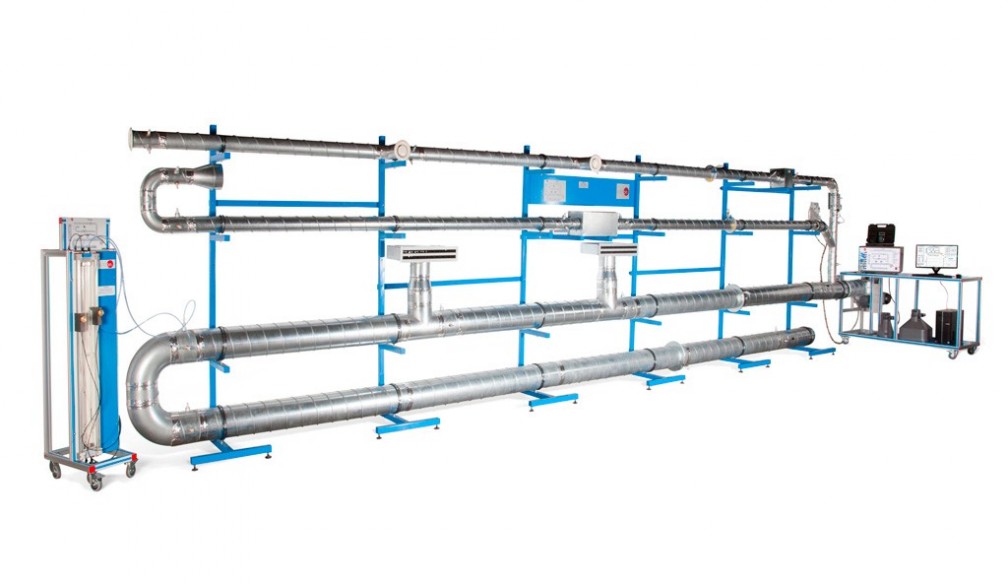 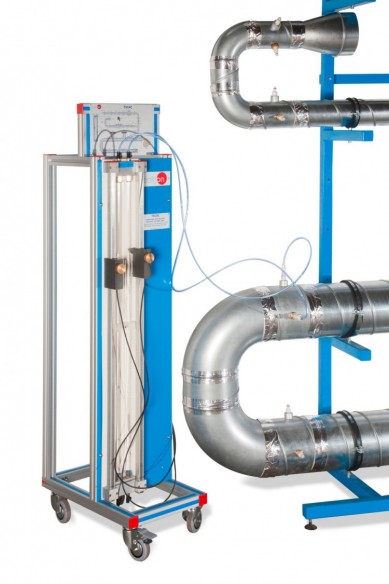 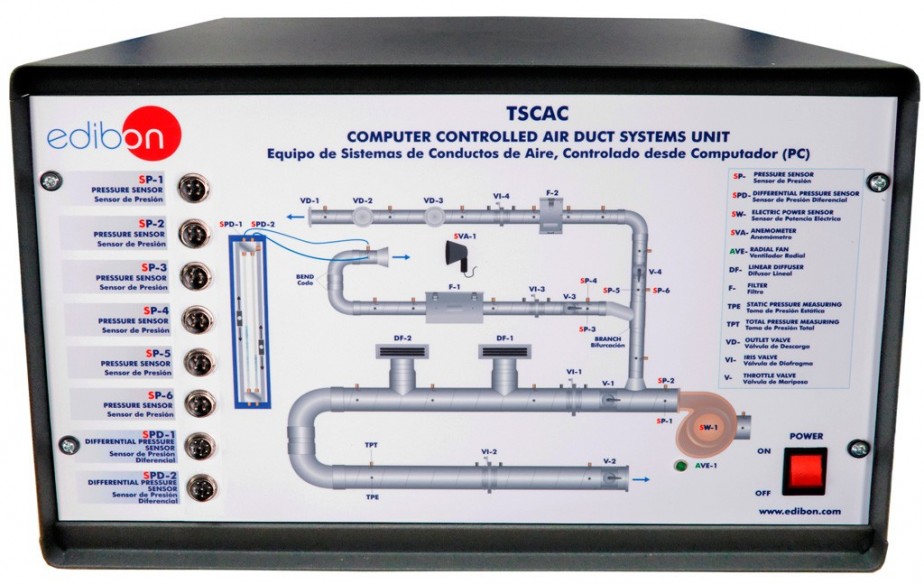 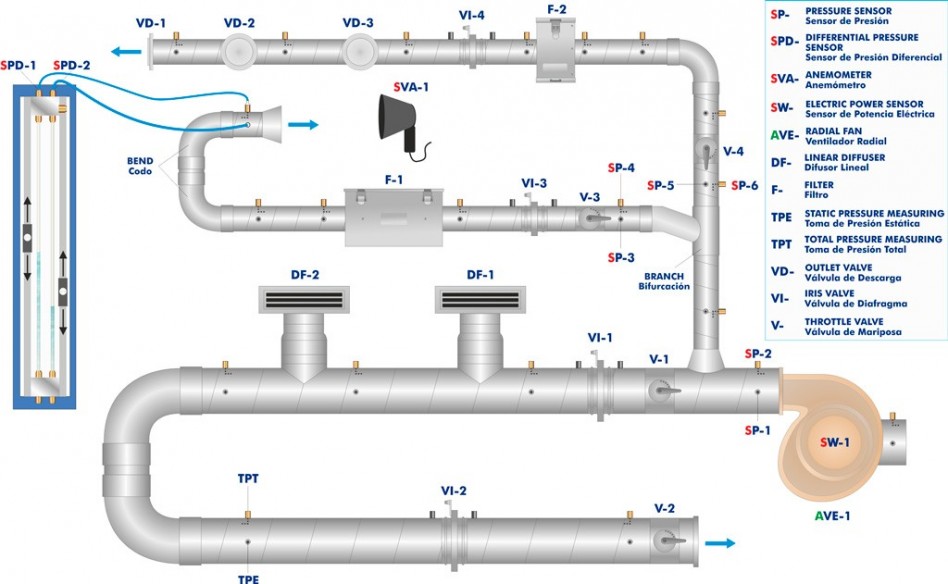 With the Computer Controlled Air Duct Systems Unit, "TSCAC", the user will study the air distribution under different configurations thanks to the supports included with the unit. The user himself will assemble the air ducts using usual elements such as pipes, bends, branches, filters, diffusers and discharge valves.

With the Computer Controlled Air Duct Systems Unit, "TSCAC", the user will study the air distribution under different configurations thanks to the supports included with the unit. The user himself will assemble the air ducts using usual elements such as pipes, bends, branches, filters, diffusers and discharge valves.

The Computer Controlled Air Duct Systems Unit, "TSCAC", designed by EDIBON, consists of a set of metal ventilation ducts of different diameter, which allow for composing different ventilation networks to distribute air thanks to a series of movable and adjustable supports with the objective of understanding and handling the most important aspects related to them.

The user can build the ventilation system using usual components, such as tubes, bends, branches, filters, discharge valves, etc. After making the assembly, the effect of individual components on the pressure drop and, therefore, on the flowing air velocity and flow will be studied. Thanks to the arrangement of six pressure sensors, the volumetric flow of air in each line of the system can be determined in real time.

The duct system is supplied by a computer controlled variable flow fan, whose absorbed power will be required to determine its characteristic curve, as well as the operation point of the whole system.

The path followed by the air along the different elements included in the system will be chosen by using butterfly valves, diaphragm valves and distribution elements. The air, when flowing through the elements mentioned, will suffer pressure drops that will be quantified due to the arrangement of several exchangeable connections, where the static and total pressure can be measured thanks to the location of Pitot tubes in every connection.

There is a quick connection portable differential "U" manometer to determine those pressures. It allows for knowing the differential pressure between whatever points of the system. Besides, there is a portable anemometer to measure velocities and flows at the outlet of the ducts. 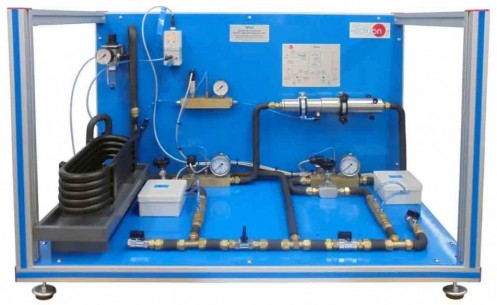 The Computer Controlled Vortex Tube Refrigerator Unit, "TPVC", is a unit designed to study the physical, mechanical and thermodynamic characteristics of a vortex tube.This unit works with compressed air. The air, previously filtered to remove... The objective of the Computer Controlled Refrigeration Unit with Refrigeration and Freezing Chamber "TRRC" designed by EDIBON is to introduce the student into the complex world of refrigeration systems, as well as to study and determine the... The Computer Controlled Refrigeration Circuit with Variable Load, "TRCAC", is a unit designed for the study of a refrigeration cycle with an thermal adjustable load.The unit includes all the components required for a fully operational... 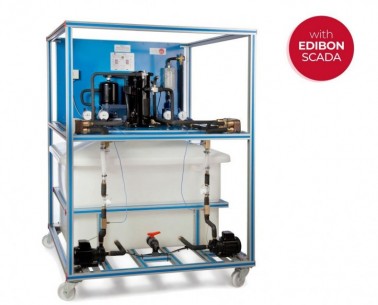 The Computer Controlled Vapour-Compression Refrigeration Unit, "TRCVC", allows the understanding of the vapor-compression refrigeration process by changing the operation of the different parts of the process, and to study the response of the... 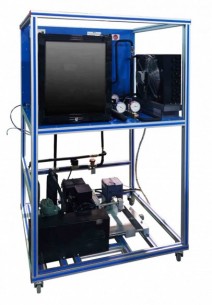 The Computer Controlled Refrigeration Unit with Open Compressor is arranged in a clear way and represents a typical compression refrigeration system with open compressor:The main elements of the unit are:Open compressor activated by an electric... 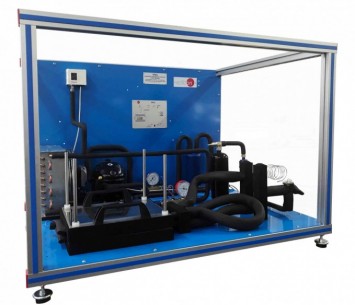 The Computer Controlled Contact Plate Freezer, "TPCC", allow the student to freeze food products quickly by using an industrial freezing process. The unit includes a compression refrigeration circuit. It is based on mechanically forcing the... 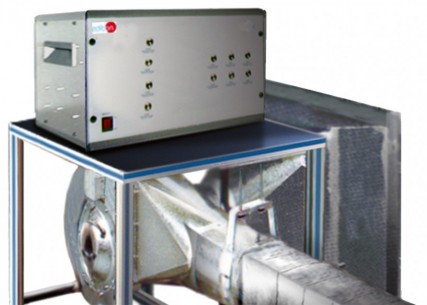 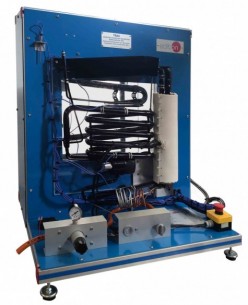 The Computer Controlled Absorption Refrigeration Unit, "TRAC", developed by EDIBON, is a complete laboratory unit for the demonstration of absorption refrigeration.This unit is provided with a dual power source (heat source) of LPG and... The THALAC/1 has been designed to allow the students to understand the behaviour and characteristics of a heat pump (with air evaporator and water condenser) working in the steam compression cycle and with three compressors connected in... The Computer Controlled Heat Pump + Air Conditioning + Refrigeration with 2 Condensers and 2 Evaporators (Water/Air)), "THAR22C", has as aim introduce the student to the study of the heat pumps, air conditioning and refrigeration, as well as the...