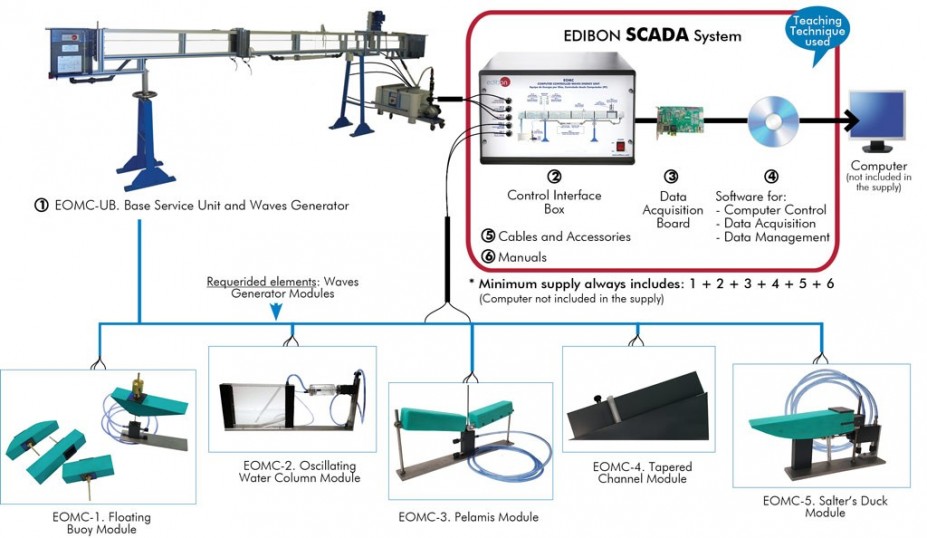 The Computer Controlled Waves Energy Unit, "EOMC", is a unit in scale, designed to study the wave energy and the influence of several variables.

The Computer Controlled Waves Energy Unit, "EOMC", is a unit in scale, designed to study the wave energy and the influence of several variables. The unit consists of a Base Service Unit and Waves Generator "EOMC-UB" and several Modules to be used with the "EOMC-UB", which allow to study the conversion from the waves energy into mechanical energy.

The minimum supply consists of two main elements: the Base Service Unit and Waves Generator, "EOMC-UB", and at least one of the required elements described below.

The "EOMC-UB" unit mainly consists of a flow channel and a waves generator:

The flow channel consists of a rectangular section with transparent walls through which water is made to circulate. Water is taken from the storage tank by means of a hydraulic pump (computer controlled) and it is driven to the inlet tank through the pipe, where the flow is quietened. Afterwards it circulates through the channel that discharges in the reception tank, returning finally to the storage tank. Thus, the closed circuit is complete. A waves sensor situated on the flow channel allows to measure the height and the frequency of the waves.

Required elements (at least one) (Not included):

The EOMC-1, EOMC-2, EOMC-3 and EOMC-5 modules include a double acting water pump, able to extract a variable amount of water due to the up thrust of the wave and the down force of gravity. The outlet pipes are routed to two reservoirs mounted on a support. The amount of water collected over a number of wave cycles can be measured. They include two pressure sensors to measure the water height in the reservoirs and two flow sensors to measure the impelled water flow by the Modules.

Practices to be done with the Base Service Unit and Waves Generator (EOMC-UB):

Practices to be done with the Floating Buoy Module (EOMC-1):

Practices to be done with the Oscillating Water Column Module (EOMC-2):

Practices to be done with the Pelamis Module (EOMC-3):

Practices to be done with the Tapered Channel Module (EOMC-4):

Practices to be done with the Salter’s Duck Module (EOMC-5): 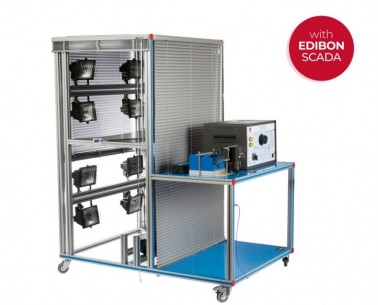 The Computer Controlled Photovoltaic Solar Energy Unit, "EESFC", includes equipment that uses the photo-conversion law for the direct conversion of solar radiation into electricity. The absorbed energy is provided by simulated solar radiation,... 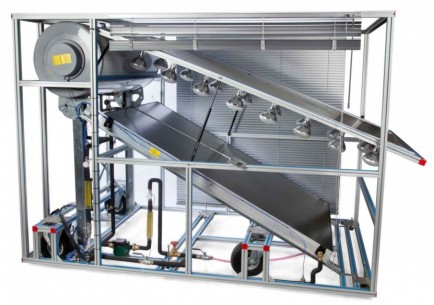 The Computer Controlled Thermal Solar Energy Unit, "EESTC", is a system that transforms solar energy into usable thermal energy. It uses the thermosiphon solar system to heat water or the traditional pumping system. In both cases, the absorbed... 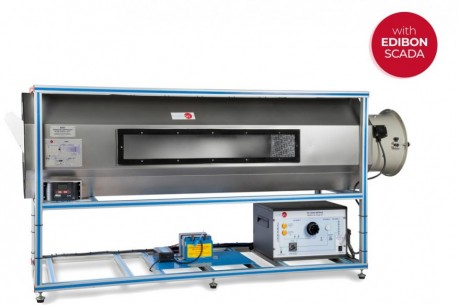 The Computer Controlled Wind Energy Unit, "EEEC", contains an aerogenerator, in laboratory-scale, and is used to study the conversion of kinetic wind energy into electrical energy and to study the influence of some factors on this generation.The... 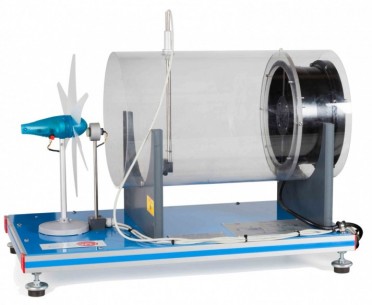 The Computer Controlled Wind Energy Basic Unit, "MINI-EEEC", is a small-scale unit designed to study wind energy and the influence of some factors on its generation.This unit consists of a transparent tunnel, a wind turbine with rotor to place up... 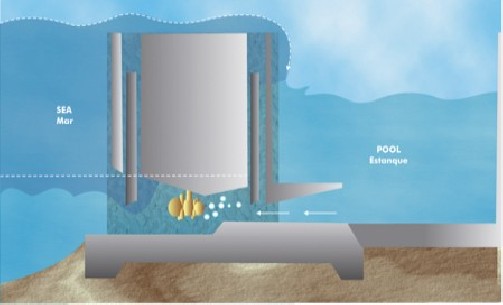 Tidal energy is another way to generate electricity extracting energy from the sea. Twice a day big volumes of water rise and fall with the tides. A Tidal Barrage make use of the potential energy in the difference in height (or head) between high... 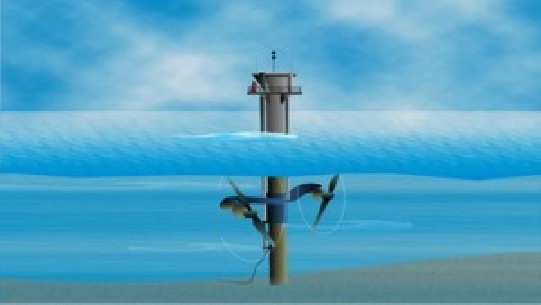 An interesting technology for harnessing the energy from the ocean currents is the use of turbine-driven generators anchored in place in the current stream.The blades of the turbine are driven by the moving water. These blades are used to turn the...