The Computer Controlled Steam Power Plant Adjustable up to 20 kW, "TPTVC/20kW", converts thermal energy into mechanical energy and afterwards into electrical energy. It allows the students to understand the entire process and the basic components of a power plant (heat source to generate steam, a turbine with load and a refrigeration system to condense the steam).

The Computer Controlled Steam Power Plant Adjustable up to 20 kW, "TPTVC/20kW", represents a laboratory scale power plant, guaranteeing a great similarity with a real system. It offers many practical exercises to familiarize the student with the operation procedure of a steam power plant with process control. Besides, it has different optional modules to adapt to the needs of each working place.

The process starts with a pre-treatment of the water to avoid the introduction of hard water to the process. EDIBON suggests the Softener Unit, "SFU", as an OPTIONAL unit, to remove the salts, impurities and other substances that may dirt the inside of the steam plant components.

The water of the first inlet tank is introduced by a computer controlled pump in the steam generation system, after passing through a set of sensors that collect information about the inlet temperature, pressure and flow to the generator. For the steam generation, EDIBON recommends the OPTIONAL Steam Generator Unit, "SGU". It is a steam generator with a burner that can work with different fuels (diesel oil or natural gas) with control over the working temperature, which generates steam quickly.

When the steam is generated at the working pressure and temperature conditions (superheated steam), it is driven to a turbine after passing through a droplet separator. Before being introduced in the turbine, a set of sensors gathers the values of the steam pressure, temperature and flow and transfer the information to the computer. The turbine is supplied with two generators and the rotation of the turbine vanes generates the electrical current thanks to the motion transferred by the shaft to those generators, coupled to both sides of the turbine. Two working modes are available: an isolated working mode, in which a group of variable resistors consume the electrical energy produced by the generator coupled to the turbine, and a grid synchronization working mode, in which all the electrical parameters (P, Q, S, f, etc.) supplied by the generator to the grid are measured.

The turbine has a computer controlled speed system consisting of a series of inlet nozzles, which control the power generation from 2.5 kWe to 15 kWe in function of the amount of steam introduced.

A pressure sensor and a temperature sensor measure the steam conditions at the outlet of the turbine. The steam coming out of the turbine is condensed in a heat exchanger and is recirculated to its inlet water tank by a computer controlled tank.

The pressure in the circuit at the outlet of the turbine is negative thanks to a vacuum system consisting of a vacuum pump and two tanks, making the pressure drops easier in the turbine.

Thermodinamic cycle and study of the power generated:

Parameters of the power generation:

The Computer Controlled 1.5kW Steam Power Plant, "TPTVC/1.5kW", represents a laboratory scale power plant, guaranteeing a great similarity with a real system. It offers many practical exercises to familiarize the student with the operation... 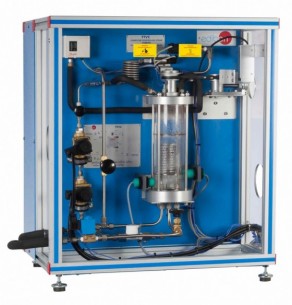 The Computer Controlled Steam Turbine, "TTVC", consists of a single stage impulse steam turbine. It includes an injector, a brake, a water cooled condenser, safety mechanisms and all the necessary controls and instrumentation.The steam passes...

The Computer Controlled 1.5kW Steam Power Plant, "TPTVC/1.5kW", represents a laboratory scale power plant, guaranteeing a great similarity with a real system. It offers many practical exercises to familiarize the student with the operation... The Computer Controlled Solar/Heat Source Vapour Turbine, "HTVC", has been designed to provide an easily understood vapour power plant and to demonstrate, on a lab scale, the ability to produce shaft power from Solar Radiation.It is a bench-top...

The Computer Controlled Organic Rankine Cycle Unit, "TORC", allows the student to study the complete process and the components of an organic Rankine Cycle, as well as the main variables that take part in the process. The working fluid (coolant...