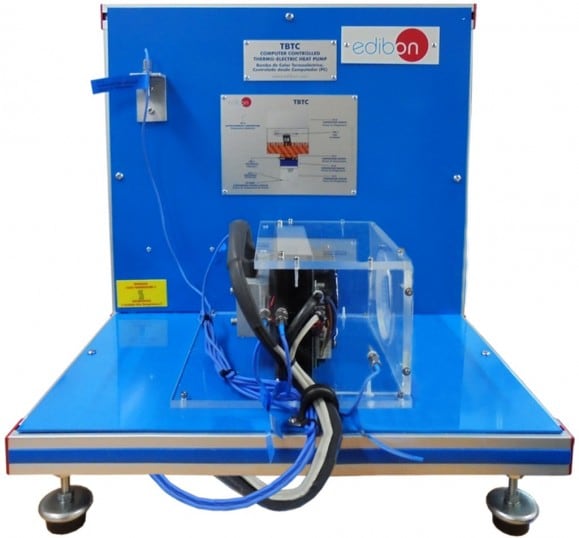 We will be able to carry out with this unit the study and use of a Peltier element as a heat pump and for the refrigeration.

There is a heating element, computer controlled, covered by a thermally insulated conductor made of stainless steel, over the cold side of the module. A heatsink is located in the hot side of the module,it is composed of a heat exchanger and a fan placed inside an insulated box.

Different experimental configurations of the unit can be easily established through the activation of different switches.

The thermoelectric module is composed of two small semiconductor pieces, A and B, one of them of the n-type and the other one of the p-type. They are joined by one of their ends through a metallic joint or weld. If this joint is subjected to a heat source, keeping it at a high temperature meanwhile the rest is kept at a lower temperature, a small electromotive force is generated that produces an electric current in the circuit.

In a similar way, due to Peltier’s effect, if a current passes through the semiconductor joints circuit p-n and n-p, some of them heat up and other cool down, generating a temperature gradient among the plates.

The thermoelectric element consists of a variable number of joints placed electrically in series, but thermally in parallel.

The unit includes two temperature control sensors, situated in the heating element and in one side of the module.

The Computer Controlled Stirling Motor, "TMSC", is used to demonstrate the operation of a thermodynamic machine for the conversion of energy. It converts thermal energy into mechanical energy and operates as a motor (heat engine). Additionally it...