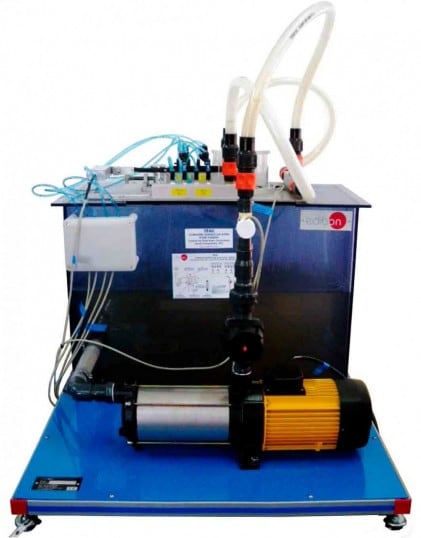 The Computer Controlled Axial Flow Turbine, "TFAC", designed by EDIBON, consists of a turbine with an axial flow input, which allows fundamental tests to be carried out to study the parameters and characteristic curves of an axial flow turbine. 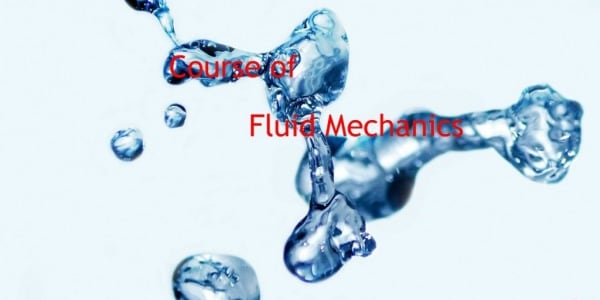 Are you a teacher or do you work as an engineering researcher? EDIBON offers courses for teachers and #research staff. Take a look at the course of Fluid Mechanics and learn about #fluids properties. #DiscoverEdibon #Engineering.
03 Jul 2018, 11:09 Baca lebih lanjut

The Computer Controlled Axial Flow Turbine, "TFAC", consists of a small-scale turbine with single-stage axial flow input. It has eight nozzles that act as water rings to the rotor, four of which have an incidence angle of 20º and the other four of 30º. In this way, it is possible to study the differences in the working regime by varying the entry angles into the turbine through eight valves that allow the water to pass to the different nozzles.

In order to raise the fluid, it has a computer controlled pump that enables the impelled flow to pass through the turbine, in which part of its energy is left, causing the turbine to turn, overcoming the external resistance caused by an electromagnetic brake. This computer controlled brake makes it possible to vary the braking load on the turbine.

The pump-turbine group has a tank and a pipes system which allow to work constantly with recirculated fluid to avoid the indiscriminate water consumption. 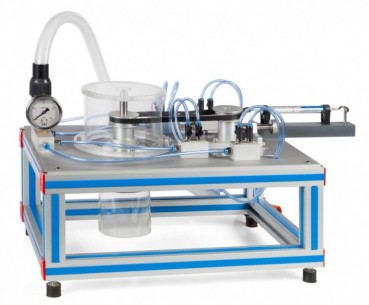 With the Axial Turbine, "FME27", designed by EDIBON, it is possible to study and to understand the axial flow turbines which, unlike the radial flow turbines, the working fluid is parallel to the axis of rotation.This unit consists of an axial...

Computer Controlled Modular Hydraulic Turbine Unit,"HTMC", has been designed by EDIBON for the study and comparison of different types of small scale hydraulic turbines, allowing the determine the operation characteristics of this type of turbine,... The Hydroelectric Power Plants Application with Pelton Turbine, "AEL-HPPP", has been designed by EDIBON with a double purpose: inone hand it allows to study the mechanical characteristics of a Pelton turbine (designed by EDIBON) and, on the other... The Hydroelectric Power Plants Application with Francis Turbine, "AEL-HPPF", has been designed by EDIBON with a double purpose: on one hand it allows studying the performance characteristics of a Francis turbine and, on the other hand, it allows... The Advanced Advanced Hydroelectric Power Plants Application with Pelton Turbine, "AEL-HPPPA", has been designed by EDIBON with a double purpose: on one hand it allows studying the performance characteristics of a Pelton turbine and, on the other... The Hydroelectric Power Plants Application with Kaplan Turbine, "AEL-HPPK", has been designed by EDIBON with a double purpose: on one hand it allows to study the hydroelectric power plants with Kaplan turbine and, on the other hand, it is possible...

The Pelton Turbine, Computer Controlled (PC), "TPC", consists of a small-scale Pelton turbine, with a valve that allows the flow to be regulated. The turbine includes a PELTON runner with 16 buckets, which can be clearly seen through the turbine’s...

The Computer Controlled Kaplan Turbine, "TKC", consists of a small-scale Kaplan turbine that has a ring with adjustable guide vanes, which allow the control of water flow in the turbine.In order to raise the fluid, it has a computer controlled... 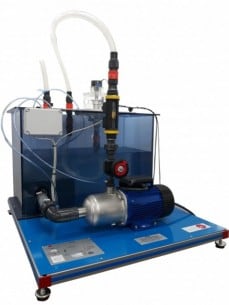 The Computer Controlled Radial Flow Turbine, "TFRC", consists of a small-scale radial flow turbine with two nozzles at 90 degrees to the perpendicular direction of the axis of rotation.In order to raise the fluid, it has a computer controlled pump... The Experimental Reaction Turbine, Computer Controlled (PC), "HTRC", allows to study the characteristics of operation of a small scale reaction turbine.This unit includes suitable instrumentation to measure the main parameters:There is a pressure...

The Computer Controlled Experimental Impulse Turbine, "HTIC", allows to study the characteristics and the behavior of a small scale impulse turbine.This unit includes suitable instrumentation to measure the main parameters:There is a pressure...