It allows the spatial study of the electric field in all its dimensions: calculation of the intensity, lines of force, equipotential surfaces in both static and dynamic fields that give the student a broader spatial vision not provided by other methods. 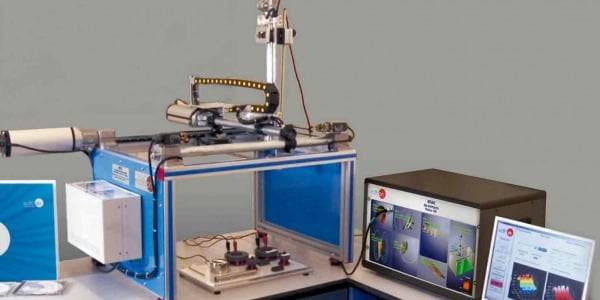 The mathematical tools of derivation and integration that the administration software has, allow experimental testing of the laws, theorems and basic principles of the electricity rooted to the theoretical area and which, through the FCE unit, can be moved to the experimental area. The supply of spheres, cylinders, wires and conductor planes, together with the sources of load allow the student to experimentally study the law of Coulomb, the electric force between conductor spheres, the theorem of Gauss and the principle of superimposition. The calculation of the electric flux allows us to determine experimentally the redistribution of loads generated in parallel-plane condensers in series and parallel configurations. The effects of the dielectrics in the condensers will be carried out by different materials: blocks of wood, glass and plastic, which allow to study the series/parallel configurations.

It allows the spatial study of the electric field in all its dimensions: calculation of the intensity, lines of force, equipotential surfaces in both static and dynamic fields that give the student a broader spatial vision not provided by other methods.

All those of Level I.

All those of level I and II.

IMPORTANT: The teacher can use his own elements, so these practical possibilities are NEARLY UNLIMITED.

The basis of the "FCM", Set for the Application of Magnetic Fields, is to systematically measure the components of the magnetic field in space. For this purpose, the computer-controlled robot arm sweeps a region of space measuring the intensity of...

Rainbows, mirages, the color of what we see, laser light, X-rays, etc. are all typical situations with which we live and whose explanation is based on optical theories. Sometimes they seem complicated, but they are all based on the combination of...